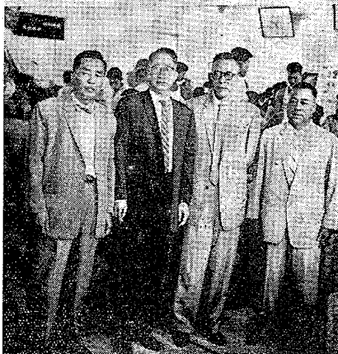 While the majority of the post-War industrialists in HK came to the British colony to flee from the Communists in the mainland, some were sympathetic to the new regime from its earliest days. Within this minority group – which can be referred to as “red industrialists”, S.Y. Tang (1892-1984, he went by the Chinese name Tang Din-cho 鄧典初 but went by the abbreviated version of his original name Shing-yi Tang 鄧盛儀 for his English name) and his younger brother Tang Hung-yee (鄧鴻儀, 1894-?) were particularly unique as they were educated in the United States and was so supportive of the new regime that they moved an entire factory up from HK to Northern China at the height of the Korean War. With their industrial ventures, they pioneered the manufacturing of nails and metal windows in Hong Kong. 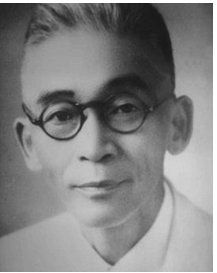 Teng Chih-I – the most famous of the Tang brothers

Tang Hing-wan (鄧慶雲), the father of the Tang brothers, was born in 1860 into a family of poor farmers in Dongguan in Guangdong province. He joined the military and rose to become a military official of the fourth rank in Shunde during the late Ching dynasty and later a lieutenant colonel in the Republican Army. Academically gifted but not able to further his study in his youth due to lack of funds, Hing-wan encouraged his 10 children to study and at least three of his sons studied abroad.  The eldest of three – Tang Chik-yi (鄧植儀, who went by the pinyin English name of Teng Chih-I, 1888-1957) received his Ph.D. in soil science from the University of Wisconsin and was well known for his contributions to modern agriculture as the pioneer of soil science in China and founded the College of Agriculture at the Sun Yat Sen University in Canton and the Canton Soil Research Institute.

Shing Y. Tang, Hung-yee Tang, Som-Quong Wong and 60 other Michigan alums at the Bankers Club at the organization of the local alumni chapter in 1949. Other present include Hank Sperry (head of Citibank in HK and son in law of Lee Hysan), Jack Yuen (counsel for AIA), Dewey Chia (shipping executive), Dr. Ju-mei Yang (dean of commerce at CUHK) and Robert Suez (engineer) Source: Michigan Alumnus

Upon graduation, S.Y. Tang returned to Canton where he worked as a lecturer in engineering at the newly formed National Canton University, which became Sun Yat Sen University in 1926 and where his older brother Chik-yi also worked. When the Japanese occupied Canton in 1938, Tang along with many others moved to Hong Kong where he established HK Nail Factory, the first nail factory in the colony with capital of HK$200,000.

For the site of the nail factory, S.Y. Tang picked a 30,000 square-foot plot (also known as I.L. 3539 Java Road) next to the Commercial Press on King’s Road in North Point which was newly designated as an industrial area by the government. Next to the water, the area was convenient for transportation of industrial products (land in the area only cost $0.80 per sq ft back then and was rising up to $1-2 per sq ft). According to press reports, all of the factory’s machinery were imported from the US while the steel wires used to make the nails were imported from Germany and the US. According to S.Y. Tang who spoke with the reporters, the factory was doing well with lots of orders flowing in domestically and abroad, having to work 20 hours days and was producing 2500 buckets of nails per month (each bucket weighing 100 kilograms and costing $10)

After the War, the Tang brothers invited a Chinese American classmate from Michigan by the name of Som-Quong Wong (1889-1958) to join HK Nail Factory as managing director. Graduating from the University of Michigan in 1921 with a B.S. in architecture, Wong was the son of Fee-Lee Wong, a prominent merchant in the frontier town of Deadwood, South Dakota and he also distinguished himself as a high ranking officer in the US armed services during WWII as a captain in the US Marine Corps. Wong’s wife Anna Tang Yuet-ha was a graduate of Oberlin College and Columbia University’s Teachers College. (it’s unclear if she was related to the Tang brothers)

Left: Som-Quong Wong in his US military uniform; Right: Chen Kwang-sang and his family in Tientsin in 1958

The post-war years were difficult with raw material price soaring and intense competition. By 1950, the HK Nail Factory plant which could produce 500 tons of nails per month at full capacity was only making around 100 tons per month. On July 15, 1950, less than a month after the Korean War began, the Tang brothers decided to shut down the HK Nail Factory (although the firm was not dissolved until 1952) and embarked on a daring move to support the new Communist regime in China that was unprecedented.

With the financial support of pro-Beijing trader Chan Cho-Pui (陳祖沛, 1916-2006), Tang Hung-yee teamed up with Chen Kwang-sang (陳廣生 1916-2005), chief engineer of Union Metal Works (to be covered later) and the son of Fujian rebellion leader General Chen Mingshu (陳銘樞,1899-1965) to secretly transport 150 tons of equipment from the HK Nail Factory to Tientsin and also recruited workers and technicians from HK to establish a nail factory in Tientsin. The new factory was named Tientsin Dacheng Hardware Factory (天津大成五金) with Hung-yee as plant manager and Chen as chief engineer. According to Ta Kung Pao reports, the new plant’s production was ten times that of the HK plant and prospered with the help of state owned enterprises. 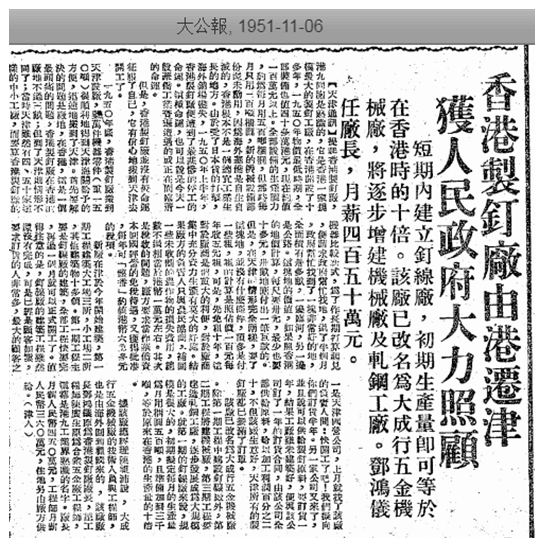 After the War, S.Y. Tang decided to enter another new industry – the manufacturing of metal windows. Before the War, 95% of metal windows in HK were imported from the UK and the remaining 5% from the US and other countries with zero local production. To change that situation, Tang formed Canton Metal Window Manufacturing in 1948 with HK$1 million in capital with equipment imported from England and installed his son Tang Sik-chi (鄧錫智), a US-trained engineer as plant manager. In 1951, the plant at 500 Castle Peak Road had monthly production capacity of 30,000 square foot which was half utilized. The firm focused on higher quality stainless metal windows which were 40% more expensive than the regular kind which could easily rust and its quality rivalled that of imported ones. The majority of the firm’s sales was domestic with some business from Macau and notable clients included the Luna Park amusement park in North Point, the Navy barracks in the Mid-Levels and the Methodist Church in Kowloon. Most of the raw materials came from Belgium but due to export restrictions by the Belgian government, the firm actively sought alternative sources. 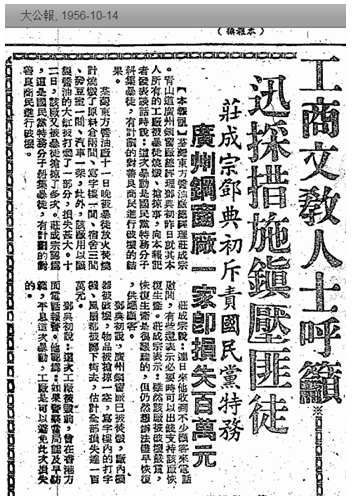 Article about Chong Sing-chong and S.Y. Tang accusing KMT spies for damages to their plants during the Double Ten riots of 1956 (Ta Kung Pao, 1956-10-14)

When rightist riots broke out in (also known as the “Double Ten Riots”), Canton Metal Window became a target because of Tang’s pro-Beijing stance. A letter sent by the factory to the Chinese Manufacturers Association after the riot described what transpired at the Canton Metal Window Factory in detail – “Around noon on October 11, 1956, a dozen rioters started throwing rocks at the main entrance of the factory. At the time, all the staff in the factory had been evacuated and the gates were locked. The management of the plant called the police in Kowloon to protect the plant but none of them showed up.  A large number of rioters then emerged and broke into the second-floor office with ladders. They proceeded to throw office equipment such as typewriters and calculators and files out the window and lighted the office on fire. Then two groups of rioters broke into the first floor factory where they destroyed the machines and ransacked the possessions of the workers such as clothing and blankets. They also took equipment and spare parts before they left at around 3pm.“ (TKP, 1956-10-27)

Throughout the 1960s, S.Y. was consistently elected vice chairman of the pro-Beijing CGCC and attended almost every annual Canton trade fair, even during the Cultural Revolution when he and fellow CGCC colleague Tong Ping-tat visited the Communist revolutionary base of Yanan. 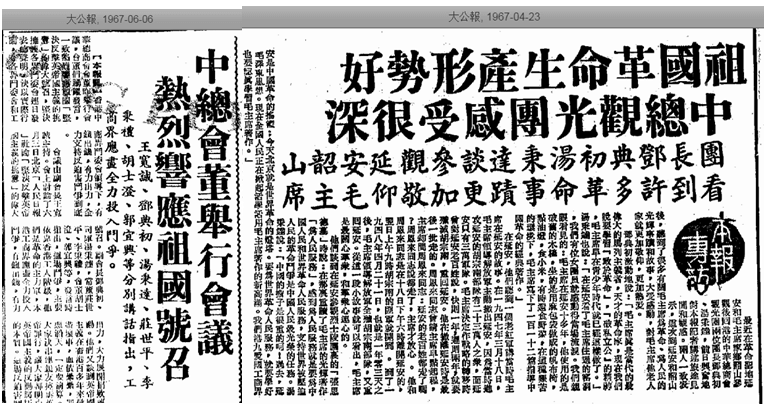 On April 13, 1984, S.Y. Tang died in HK at the age of 92. His funeral was well attended by representatives from CGCC and the Xinhua News Agency and his pallbearers included a who’s who amongst HK red capitalists he had worked alongside with in his lifetime including former CGCC chairman K.C. Wong and Tong Ping-tat (湯秉達), Sun Shing-tsang (proprietor of Chung Kiu Chinese Emporium) and Wong Pui-kau (owner of South China Toy Factory, to be covered in a later article). His ashes were buried in a revolutionary grave in Guangzhou. As a firm, Canton Metal Window was dissolved in 2003.

His son Tang Sik-chi worked for his father before setting up his own business in the silk trade. Sik-chi’s wife Shum Tak-mei (岑德美) was the first female graduate of St John’s University in Shanghai and daughter of high ranking Cantonese government official Shum Chun-huen (岑春煊). Their daughter Tang Yuen-ha (鄧宛霞) is a leading Kunqu and Peking opera actress in HK having studied under the maestro Yu Zhenfei and founder and artistic director of the Jingkun Theatre. Another son of S.Y. Tang was Deng Ximing (鄧錫銘,1930-1997), a top expert in laser and optics in the mainland who was a member of the Chinese Academy of Science