Ahong and Chinney are two Shanghainese builders in Hong Kong who trace their roots back to pre-War Shanghai and are controlled by two families which share the same last name – Wong.  Ahong followed the interesting path of moving first from Shanghai to British Malaya in the 1930s and then entering the HK market in the 1960s where it was involved in projects such as St George’s Building and the Landmark while Chinney grew significantly under James Wong, who gave up his career as a world class mathematician to take over his family business and also assisted his father in law, the tycoon Cha Chi-ming. 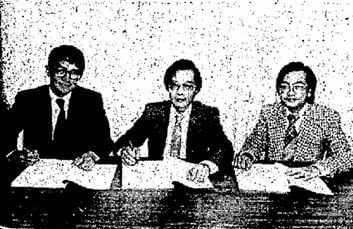 Ahong Construction was founded in Shanghai by Chao-Dao Wong (王秋濤, 1889-1962, also known as 王相賢 but not to be confused with a businessman in Singapore with the same Chinese name). A native of Nanhui in the Jiangsu province, CD Wong came to Shanghai to study at an early age and set up Ahong soon after graduation. Two of Ahong’s most prominent projects in Shanghai were the 7 story General Post Office Building with Clock Dome in 1921 and the Shanghai Race Club (Guest and Member stand with clock) in 1932.

When the Sino-Japanese War broke out in 1937, he decided to move south to British Malaya where Ahong was awarded the contract to build the New Johore Government Building in Johore from 1939-41. Meanwhile, his eldest son Charles Chun-chu Wong (王俊初, 1916-1995) remained in Shanghai where he completed his education at St John’s Middle School (1933-39) and St John’s University (1939-1942) where he received his BSc in civil engineering. He then became managing partner of Yates Construction Co in Shanghai from 1942 to 1949 before joining his father as manager and Chief Engineer of Ahong Construction Singapore from 1950-1959 and becoming a partner of Ahong in 1956. 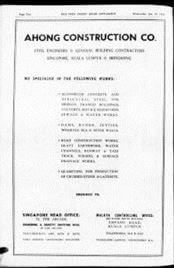 During the 1950s, Ahong participated in a number of major projects in Malaya such as the Federal House (post office savings bank) for Public Works Department, Federation of Malaya in Kuala Lumpur in 1952-54 and the extension of the Runway and Taxi Track for the Royal Air Force Station in Butterworth, Penang in 1953-54.

In 1960, Ahong entered the HK market and Ahong Construction (HK) Ltd was established with Charles Wong at the helm and offices on the 6th Floor of the Han Hing Mansion on 40 Hankow Road in Tsim Sha Tsui. A few of his first projects in the colony involved building camps for the Nepalese Gurkhas working for the colonial government – this included the Gurkha Married Quarters (15 three storied buildings) in Sek Kong in 1960, the Gurkha Family Camp which encompassed 250 one story houses Sam Wai near Sha Tau Kok in 1961; the Gurkha Family Camp (150 homes) in Queen’s Hill near Sam Wai in 1962 and the Gurkha Field Camp on Castle Peak Road at 17 ½ mile Tai Lam in 1963.

In November 1962, CD Wong passed away in his home in Kuala Lumpur. Aside from Charles, he was survived by three other sons – Chun-kit, who also graduated from SJU in Shanghai with a civil engineering degree, Chun-Hao who was a chartered accountant and Bobby Wong Chun-pong (王俊邦), who was also trained as a civil engineer.

Business continued to grow in Malaya after CD’s death – in 1965, Ahong formed a 50-50 joint venture with Oceanic Properties, a subsidiary of Castle & Cook of Hawaii to build twelve 16 story apartment buildings in Kuala Lumpur and also a concrete plant. The next year, Ahong completed the construction of the National Electrical Board Building (20 stories, now known as Tenaga Nasional Berhad) in Kuala Lumpur.

In 1979, Charles Wong became the 50th chairman of the HK Building Contractors Association, succeeding Tai Tung-Ngok. In 1980, Ahong completed one of its highest profile projects – the 48 story Gloucester Tower in Central (now part of the Landmark complex) for HK Land for HK$200 million.

A British citizen since 1954 and a member of the American Society of Civil Engineers since 1957, Charles married Sophia Wai-fung Yee (奚蕙芳) in 1942 in Shanghai with whom he had three sons and five daughters. He served as president of the HK chapter of the SJU Alumni Association shortly before his death in December 1995 at the age of 79 and was one of the major supporters of the establishment of St John’s College at the University of British Columbia. Two of his sons – James K. Wong (王國樑) and Thomas Wong (王國棟) – and his brother Bobby worked at Ahong.

Chinney Construction Group is one of the leading construction firms in Hong Kong and traces its roots back to the construction business founded by Wong Chu-Choi (王佐才) in Shanghai in 1929.

A native of Fenghua in Ningbo, C.C. Wong grew up poor but mastered English and achieved success in the business arena in old Shanghai. According to his eldest son James, CC was an acquaintance of Chiang Kai-shek (who also came from Fenghua) and received a call from Chiang asking him to leave Shanghai in 1949 shortly before the Communists arrived. He arrived in HK with James and only a briefcase and US$1000 in cash, leaving behind his wife and 2 younger sons who would not join him until a number of years later.

With the help of his sworn brother S.D. Kiang (江上達), the founder of cotton spinning mill Hongkong Textile (later absorbed by Wheelock and renamed Textile Corp of HK), Wong established Chinney Construction (建業建築, not to be confused with another Shanghainese builder in Taiwan – Jay Ease & Co 建業營造廠 which was owned by the Chou family) in HK.

After graduating from Caltech with a PhD in math in 1965, James Wong Sai-wing (王世榮, 1940-) initially pursued a career in academia and became a full professor at the University of Iowa before the age of 30.  In August 1972, CC Wong passed away at the age of 85 and James was asked to return to HK to take over the family business. Mentored by his father in law, the textile and property tycoon Cha Chi-ming, James proved to be a shrewd businessman and over the next four decades built the Chinney Group into a sizeable property developer and building contractor with a number of listed subsidiaries (such as its construction arm Chinney Alliance, foundation piling business Chinney Kin Wing and property development arm Hon Kwok Land) and completed over 1000 construction projects in HK and Macau.

James’ youngest brother Stewart Wong Sue-toa (王世濤), who graduated from Carnegie Mellon with a MSc in civil engineering is also in the construction business. He has served as the managing director of Hanison Construction since its inception in 1989 as the construction arm of the Cha Group.

This article was first posted on 3rd March 2017.