While the government and many industry organizations have played a role in providing the necessary vocational training for various industries in HK, several private technical schools emerged in the 1930s to 1950s to fill the unmet need of training workers for the burgeoning electronics industry. Of these, the most famous were World Electric Engineering College, South East Radio College and Columbia Radio Institute which sadly all faded into history as industries moved north and HK became more of a service economy. The many graduates and students of these schools made significant contributions to the HK technology media and telecom industries. Below are profiles of these three schools by chronological order of establishment: 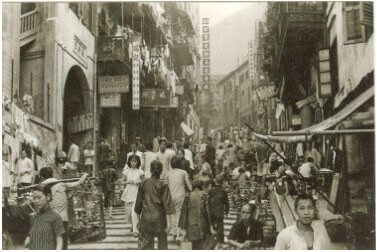 Original location of World Electric Engineering College in Central. The school’s sign could be seen in the upper left corner in this picture (Uwants)

World Electric Engineering College was founded in 1937 and was the first private school specializing in electrical engineering in HK. Its founder and headmaster Leung Chin-wan (梁展雲, 1912-1977) was a Shunde native who served as director of the Pok Oi Hospital from 1966 to 1968. (WKYP, 1977-4-12)

From a 1954 article (WKYP, 1954-7-19), it appears the school also ran a primary school division and posts online also indicated that a kindergarten tied to the school existed. The school ran night and day classes but class sizes were relatively small, only graduating around 30 people a class. Originally located near Hollywood Road, the school relocated to 1-5 Lugard Road in Wanchai in 1968. It also introduced television classes (which could be completed within 2.5 years) that same year. (KSDN, 1968-6-26)

Notable alumni of World Electric Engineering College include Lai Kin (黎堅), the founder of small electronic consumer goods manufacturer Durable Electrical Metal Factory (實用電器金屬製品廠, later Applica Durable and now known as Durable Manufacturing) who studied at the night school in the 1950s, Lam Man-chan (林文燦), the founder of the listed CD and DVD player manufacturer Ngai Lik Industrial Holdings (毅力集團) who graduated from the school in 1969; Tai Leung-lam (戴良林), CEO of listed Trio Industrial Electronics Group (致豐工業電子) who received his diploma in 1965 and Ng Kat-hing, one of the first converts of the Mormon Church in post-war Hong Kong and president of its HK Temple. 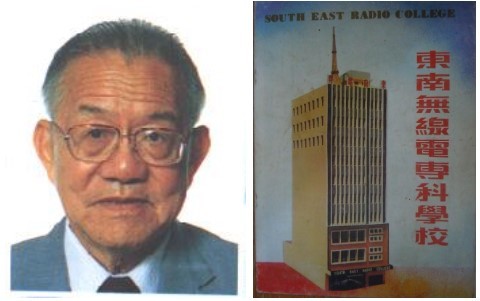 Founded in 1946 by Kwong Mon-chei (鄺文熾 1913-2018), South East Radio College began in a rented storefront on Tai Nam Street in Sham Shui Po with 7 students and grew to become a leading private technical school with its own 10 story building by the late 1960s with over 2500 students at its peak.

A native of Toishan, Kwong’s grandfather was a railroad worker in the US who operated a laundry business in San Francisco. His father was a professor in Canton and enrolled him at the Baptist sponsored Pui Ching Middle School in Canton which has always been known for being strong in science. After graduation from Pui Ching in 1933, Kwong studied engineering in London and New York. He served in the Nationalist Army as a radio officer at the outbreak of Sino-Japanese War for a year and came to HK after the War was over. Supported by his wife Wong Kit-fong (daughter of Chinese Canadian immigrant) with whom they have seven children, Kwong founded South East in Sham Shui Po with materials and equipment procured from the US. The school later moved to 53 Sai Yee Street in Mongkok in the 1950s. 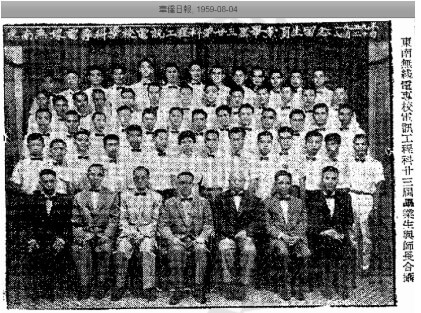 As Chinese textbooks on electronics and radio were rather scarce in the early years, Kwong personally edited many textbooks on the subjects for his students. In 1960, South East published a Chinese English Electrical Engineering dictionary written by Chung Nai-man (鍾乃蔓), a 1934 graduate of Pui Ching Middle School who later authored several other electronics textbooks.

In 1969, South East opened its 10-story building on Fa Yuen Street. The opening ceremony was led by Dr. Lam Chi-fung, the chairman of Ka Wah Bank and president of HK Baptist College and the attendees include the chairman and headmaster of Pui Ching, Lo Ching-kan, the head of the HK Scouts movement and Kwong Ming-kwong, the “Emperor of Kowloon City”. (WKYP, 1969-2-1)

According to an ad from 1959, South East was the first technical school in Southeast Asia to offer training in television technology and had its own black and white broadcasting station and related equipment for its students. (KSDN, 1959-8-8). When TVB was launched in 1967, allegedly over 20 of its technicians were trained at South East. Other notable alumni include Elec & Eltek co-founder Marcus Tsang Ming-pui (曾銘培); Wong Kam-fu (黄金富), founder of the pioneering paging and Internet service provider Star who learned how to repair radios at South East in the 1960s; Kwok Chan-cheung, co-founder of Singapore-listed electronics component distributor Willas-Array who received his certificate in radio-television engineering in 1969; Fung Siu-cheung (馮兆祥), founder of leading IT distributor Centralfield with over 16 outlets in Sham Shui Po who went to South East to study electronics in 1969 and Long Hak-kin (郎克勤), founder of the listed Atlinks Group who received his associate degree from South East in 1982. 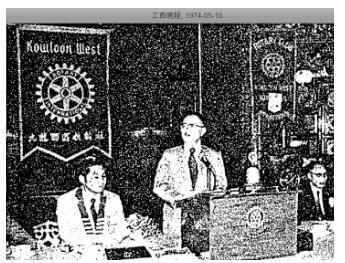 Kwong Mon-chei speaking at a Rotary Club of Kowloon West luncheon in 1974 about the contribution of radio technical schools to the HK electronics industry (KSEN, 1974-5-18)

In 1990, the 76 year old Kwong decided to retire after over four decades of running South East and immigrated to Los Angeles. Kwong was active in philanthropy and served as director of the Tung Wah Group of Hospitals in 1971-72. He was chairman of the Pui Ching Alumni Association from 1965 to 1970. In the three decades starting from 1984, Kwong and his family donated over HK$60 million to various charitable causes in his native Toishan, ranging from schools (including the first radio school in 1986 and the Toishan Pui Ching Middle School in 1998) to bridges and hospitals and even a TV station. As a result, he was named a honorary citizen of Jiangmen in 1993 and of Toishan in 1997. He died in the US at the age of 105 in 2018.

Columbia headmaster Lee Kwok-ching with his colleagues at the airport before his trip to the US and Europe to study and buy the latest equipment in 1968. Left to right: dean Lee Kwok-kee, Lee Kwok-ching, chairman Luk Chim-chun, director Chan Chi-man (KSEN, 1968-8-17)

Columbia Radio Institute was founded in 1948 and was led by its chairman Luk Chim-chun (陸占春, 1915-1978) and headmaster Lee Kwok-ching (李國楨). They were assisted in the running of the school by the school’s dean Lee Kwok-kee (李國基, likely a brother of Lee Kwok-ching based on the spelling of his name) and the school’s director Chan Chi-man (陳志民), a piece good merchant (to be confirmed if he was the son of the founder of the Yee On Tai tailor shop covered in an earlier article)

A native of Tsang Shing in Guangdong, Luk was a law graduate from University of Canton and practiced law in Canton before moving to HK in 1949 where he became an educator.  He was the headmaster of Homantin Lok Tao School (何文田樂道學校, whose supervisor was Lam Hung Wai-ching, the widow of Lam Hau-tak of Lam Yuen Fong Watch) for two decades before he retired in 1971 to become the headmaster of Lai Kwong School. His own son Luk Kwok-fan graduated from Columbia Radio Institute in 1975 and went to the US to pursue further studies although he became a restauranteur instead of working with electronics.

Lee Kwok-ching was more hands on with the day to day operations of the school and traveled frequently to learn about the latest technology in the US and other countries. In 1969, Lee Kwok-ching spent two weeks visiting Taiwan and various Southeast Asian countries (WKYP, 1969-6-27)

The school’s campus was located at 22-26 Po On Road in Sham Shui Po but also operated out of 368-370A Portland Street at one time. In addition to live instructions, Columbia also ran correspondence courses where working students could study electronics and radio engineering with take home reading materials and kits of electronic components during the week and several hours of classes on campus at the weekends. Some of these correspondence courses were launched in partnership with schools in the US and Southeast Asia. (In the late 1960s, the Caine Road English College also launched correspondence courses in partnership with the technical school ran by US electronics and radio giant RCA) In 1968, the school launched its first audio correspondence course which students could learn by listening to a record. (KSDN, 1968-7-30) A computer columnist recalled taking a correspondence course at Columbia when he was a primary school student in 1969 for which he was mailed some components to start the work at home and then fully assembled a vacuum tube radio at the Sham Shui Po campus.

In 1967, Columbia opened a special room for television and other electronic instruments as TV became more popular with the launch of TVB that year. (KSDN, 1967-02-17) 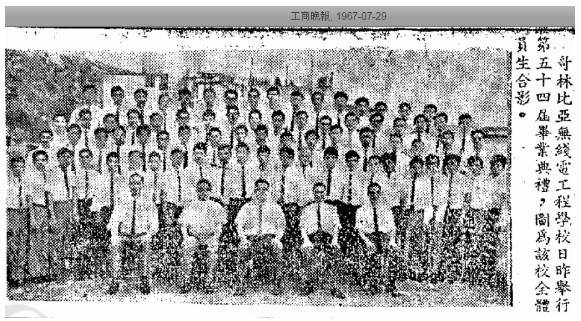 In the 1970s, the school also ran summer classes for secondary and primary school students in addition to its regular day and night classes as shown in the article above.

Notable alumni of Columbia include Kong Wah Holdings and Konka Group founder Lam Chung-kiu (see article on Conic) who studied at the night school in the 1960s; British Chinese painter Yeung Hai-shuet MBE (楊希雪) who graduated from the school in 1965 and Wong Kin-kee (黄建基), who graduated from the Institute in 1978 majoring in radio engineering and worked for Mitsubishi Electric HK/Ryoden Engineering from 1970 to 2010. 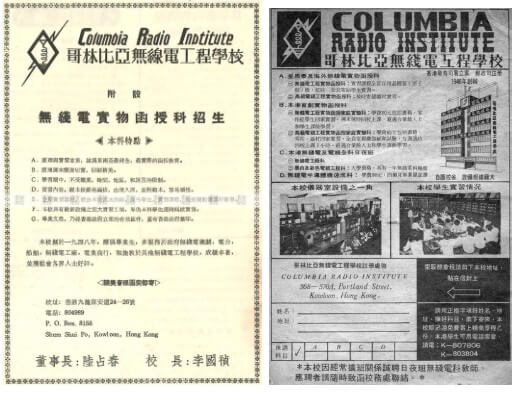 Two recruiting ads for Columbia Radio Institute – when the school was located on Po On Road (left) and Portland Street (right). The picture on the right show students in a classroom and its lab equipment.

This article was first posted on 13th October 2019.