Sine (信誼) – The Century old Saga of a Pharma Giant 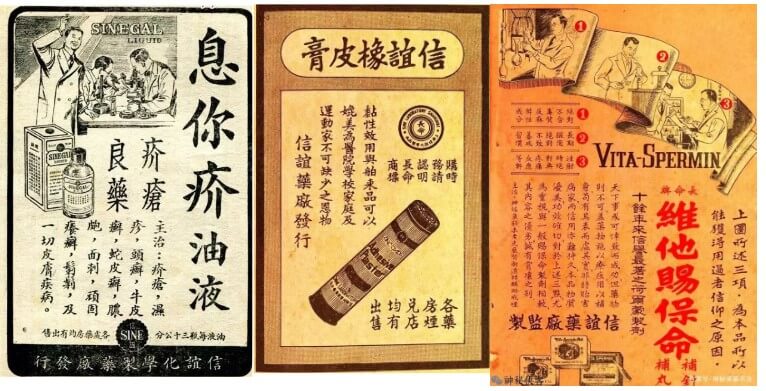 Sine Laboratory (Laboratories), once regarded as “the largest pharmaceutical firm in the Far East”, is another pharmaceutical giant with roots in Shanghai which had major presence in Hong Kong. The firm traced its origin to a pharmacy founded in 1916 by a Russian immigrant and reached its peak under the ownership and leadership of the Bao brothers in the 1930s and 1940s. After 1949, the Bao brothers continued to operate Sine in HK and Taiwan while the Shanghai operations like New Asiatic covered earlier was absorbed into the state-owned Shanghai Pharmaceutical Holding and remains a key player in the pharma business in China today.

The century old saga of Sine began with Sine Pharmacy (信誼藥房), a pharmacy selling Western medicine on 746 Avenue Joffre in the French Concession in old Shanghai founded in 1916 by Dr. Max A. Joffe, a German citizen of Russian descent with $3000 in capital. In 1918, Sine began development of drugs and Joffe came up with Vita-spermin (維他賜保命), a nutritional supplement available in tablets and ampoules which was the firm’s bestseller for many years.

In 1924, Joffe established Sine Laboratory (信誼化學製藥廠) to further develop the drug making business and hired Ho Chi-kang (何子康) to help expand the business. A graduate of the Hsiang Ya Medical College (湘雅醫學校) in Hunan, Ho had worked as pharmacist for the Hsiang Ya Hospital (湘雅醫院) in Changsha for 5 years and the German pharmacy Voelkel & Schroeder and the American-owned Eagle Drug Co (金鷹藥房) in Shanghai for 3 years each prior to joining Sine. In 1925, the Comacrib Directory listed Sine Pharmacy as “Sine Pharmacy – Deutsch Apotek GmbH” with H.W. Holland as general manager, Max Joffe as director and A.M. Rochlin as chemist with address listed as 14 Broadway. By 1927, Sine Laboratory had expanded to 10 employees and Ho’s friend Y.L. Kuo (郭雲良) also joined as a shareholder. 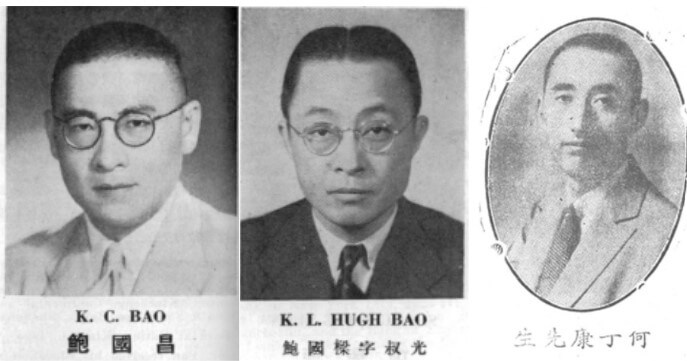 In 1930, Sine Laboratory expanded its capital base to $90800 with $52900 raised from external Chinese shareholders led by Koh-Chong Felix Bao (鮑國昌, hereafter refer to as “K.C.”), who knew C.K. Ho as fellow Chinese Christians and Max Joffe from his business dealings. A native of Ningbo, K.C. was born in 1901 and graduated from the Catholic run St. Francis Xavier College and Aurora University (震旦大學) in Shanghai with a medical degree. When his older brother Koh-Liang Hugh Bao (鮑國樑1899-1983), who also graduated from St Francis Xavier left the British trading house Jardine in 1925 to start a cotton and yarn waste trading firm I-Ta (Comacrib Directory), K.C. joined Jardine to work in its real estate department under the comprador Pan Ching-po and befriended the contractor F.S. Zee (徐虎臣) who invited him to be the part time English tutor of his two sons. When K.C. decided to invest in Sine, he brought in his brother Hugh, F.S. Zee and another friend S.F. Hsu (許世芳) as co-investors and all four joined the board of Sine with Zee as its new chairman while C.K. Ho ran the firm on a day to day basis as general manager. Around the same time, the Sine Pharmacy appeared to have taken over by A.M. Rochlin and decoupled from Sine Laboratory. The Sine Pharmacy operated by Rochlin on Avenue Joffre (renamed Linsen Road by then and now Huaihai Road) was still in business in 1947 based on the Shanghai Telephone Directory. 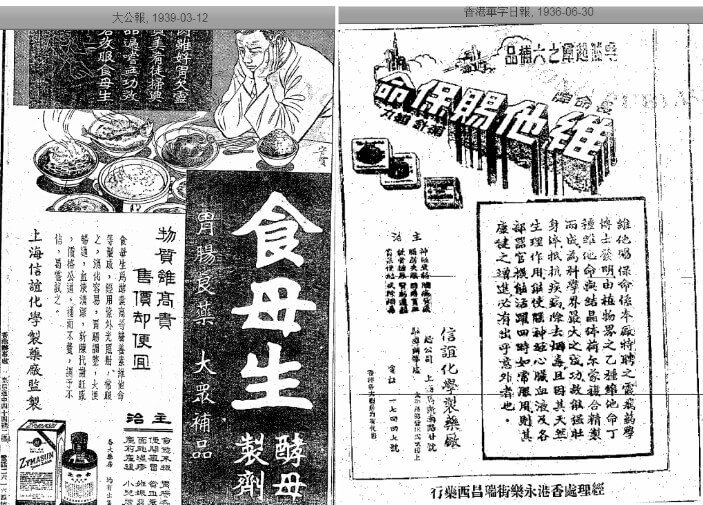 In the first seven years of their involvement with Sine, the Bao brothers were relatively hands-off as K.C. was busy at Jardines while Hugh opened the I-Ta Cotton Mill (一大製棉廠) in Pudong in 1928 and was concurrently the Chinese manager of the cotton department of the French trading firm of Olivier & Cie (永興洋行). During this time, K.C. visited Sine every Wednesday and Saturday afternoons and supported the expansion of the firm’s production capacity and product range. By 1932, Sine’s line of products had expanded to 23 including Glucocal to treat tuberculosis, Aciflavin to treat sore throat, Thiazon ointments (消治龍), Zymasun (食母生) to treat indigestion and Antiflasal, an ointment to treat inflammation although Vita-spermin still represented 50% of sales.  To promote its injection products, C.K. Ho went to the United States to obtain certifications from the US government which were granted in 1933 and with this endorsement of product quality coupled with the growing support of Chinese made products thanks to the Sino-Japanese conflict, business at Sine took off. By 1936, Sine had over 100 employees and its capital had expanded to $600,000.

In 1937, the Sino-Japanese War broke out and Max Joffe sold his shares in the firm (one source stated that he was forced out after a business dealing which resulted in significant losses for the firm) and left for America while C.K. Ho also left and later started a rival firm (極星化學製藥廠).  As a result of these changes, Sine became a 100% Chinese owned firm and K.C. Bao quit his job at Jardines and joined Sine full time to succeed Ho as its general manager. Under the leadership of K.C. who recruited many technical and management professionals and thanks to the war, Sine’s business grew rapidly in the next couple of years. In 1938, the monthly sales of Vita-spermin reached 10,000 boxes and the firm’s annual sales exceeded $500,000. In 1939, a branch was established in Singapore with a focus on promoting Vita-spermin and Zymasun. (Nanyang Siang Pao, 1939-10-20) By 1940, Sine had over 300 employees working in its four factories in Shanghai manufacturing drugs, glass, adhesive plaster and vaccines and its profits jumped from $82900 in 1938 to $576,578 in 1940.

Sine After the War 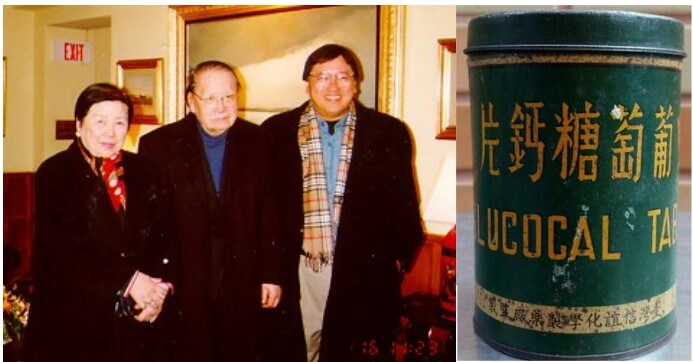 After the Japanese surrendered, K.C. Bao went on an extended trip in the US in 1946, partly to avoid the wave of wartime collaboration accusations in Shanghai but also to visit his US counterparts such as Lilly, Schering, Squibb and Monsanto and to purchase new equipment. In the late 1940s, Sine had over 600 employees in over 20 offices (including HK, Taipei, Bangkok and Singapore), two factories in Shanghai and one in Taipei, manufacturing over 70 products. The Sine Laboratories Co Ltd was incorporated in Hong Kong although the firm probably had business in the British colony before the War as a 1937 HK government register of chemists and druggists listed the name of Wong Yu-chok who was attached to the firm.

As the Civil War situation deteriorated, K.C. Bao (who controlled 38% of Sine Laboratory in Shanghai at that point) left Shanghai for Hong Kong in 1948 and handed the reins of the Shanghai operations to his brother Hugh. In 1951, K.C. left HK for Uruguay and Hugh came to HK to take over the HK business and was succeeded by Chen Ming-shan (陳銘珊, 1916-2003, joined Sine in 1942) in Shanghai. The same year, the word “Hong Kong” was added to the name of the HK registered firm. According to Business Directory of HK and Macao from the early 1950s, the directors of Sine Labs (HK) Ltd included K.C., Hugh and the building contractor Godfrey Yeh (see article on Hsin Chong) and his eldest son David Mou-chong Yeh with Hugh as managing director and David Yeh as assistant managing director.

In 1954, Hugh Bao as the head of Sine was fined HK$75 by the Hong Kong government for not properly booking inventories with suspicion of tax evasion. (WKYP, 1954-8-11) The address of the Sine factory was listed as 11B Ma Tau Kok Road. The same year, Sine Labs (HK) Ltd was dissolved and replaced by Sine Laboratories Company (HK 1955) Ltd which was incorporated the next year.

In 1955, Sine participated at the CMA’s HK Products Expo showcasing products such as hormone pills and vitamin B pills. The average experience of staff at the HK factory was over 10 years with some experts who have worked for the firm for over three decades since its inception in Shanghai (KSEN, 1955-1-7). By 1963, Hugh Bao had been replaced by Chan Wing-hun as managing director of the firm although he was still on the board alongside his golfing partner David Miao (see article), the co-founder of Commercial Radio and distributor of Schering drugs and Philips radios in HK and Chan Kai-tong. (HK $ Directory) According to US social security and grave record, Hugh Bao died in 1983 and is buried in Rhode Island. As a firm, Sine Labs Co (HK 1955) Ltd was dissolved in 1987.

Sine’s Taiwan operations managed by T.L. Chu (朱道良, 1913-), who attended Fudan University in Shanghai was re-organized into Sine Laboratory (Taiwan) Ltd (臺灣信誼化學製藥廠) which remained a major pharma firm on the island in the 1950s through 1970s with a plant in Taipei manufacturing tablets and ointments and a plant in Shulin making glucose and other chemicals.

In Uruguay, K.C. built a car assembly and import business and served as chairman of the local Chinese Chamber of Commerce. K.C. and his wife Yang Yu-ching had five sons – Joseph, Phillip, Bob, David and Yee-Jan and in 1985, he returned to Shanghai for a visit during which he donated $300,000 towards the benefits of his old staffers from Sine. As for Sine in Shanghai, it became a public private enterprise under Chen Mingshan in 1954 and was renamed Shanghai No. 7 Pharmaceutical Factory during the Cultural Revolution. The Sine brand was revived in 1979 and continue to thrive today as a wholly owned subsidiary of SPH.

This article was first posted on 13th December 2019.