Lynhall Land ad from 1958 featuring 7 of its properties that were available for sale that year (left to right): Majestic, Kingland, Hankow, Maylun, Phoenix, Lido and Mido(華僑日報, 1958-01-03)

From 1945 to 1960, the population of Hong Kong jumped sixfold from 500,000 to 3 million with the massive influx of refugees from the mainland and the related demand for housing created unprecedented opportunities for the HK real estate industry. During the real estate boom of the late 1950s and early 1960s, Lynhall Land Investment Co Ltd was one of the most aggressive participants, with advertisements promoting its many properties prominently featured in the papers every day and its founder Li Hong-chit (李康節, 1913-1989) earned the nickname of “King of North Point” (北角王) for his many projects in the district. When the Real Estate Developers Association of HK was founded in 1965, Li was one of its executive committee members, highlighting his stature as one of the pioneers of the HK real estate industry. While the firm had long faded into history as a casualty of the real estate bust in the late 1960s, many of its buildings are still standing today.

Left: Li Hong-chit as executive committee member of the HK Real Estate Developers Association in 1965; Right: Lynhall’s major backer Ho Yin (right) delivering a speech at a function. Standing next to him was his older brother Ho Tim of Hang Seng Bank.

A native of Xinhui in Guangdong province, little is known about Li’s early years – one source suggested that he came from Shanghai and was in the construction business. He was an alumnus of King’s College in HK and in 1957 donated HK$1000 towards the construction of the King’s College Old Boys Association Primary School (which was launched in 1960).

In the mid-1950s, hundreds of real estate companies were formed and pioneers such as Henry Fok (霍英東, 1923-2006) of National Investment and K.C. Wong of Dah Yuan (see article) began to develop taller residential buildings (prior to that the standard was five stories and below) to meet the soaring housing demand. To make these units more affordable, payment by installments was introduced (prior to that buyers had to come up with all the cash at purchase) and to finance the construction, units were pre-sold (now a common practice in HK but was first invented by Fok in 1953).

According to the biography of Henry Fok by the author Ling Xia (who had interviewed Fok), Li Hong-chit came up with the idea to form a syndicate pooling money from various HK and Macanese businessmen to develop properties in HK and approached Fok to become a partner given his earlier success in the HK real estate market. As honorary chairman of the Kitchee Sports Club, Li was a friend of Henry Fok and had recruited Fok to head up the sports club’s football department in 1957. Fok disliked the syndicate concept but nevertheless subscribed as a passive shareholder in the new venture out of respect for Li’s biggest backer in the venture – Ho Yin (何賢,1908-1983), the brother of Ho Tim of Hang Seng Bank and a leading businessman from Macau who had made a killing in the lucrative gold trade in partnership with Y.C. Liang after the War (see article on YC Liang and HK Macao Hydrofoil). To reflect the syndicate nature of the firm, Li picked the name “Lian He” (聯合) which means “united” for its Chinese name and the English name of Lynhall which sounded like its Chinese name.

Lynhall was formed in 1954/1955 (a 1957 ad said 3rd anniversary sale and a 1964 ad said 9th anniversary sale) but it was not formally incorporated until January 1956 with HK$1 million in registered capital and the registered address of the firm was listed as the Fu House at 7 Ice House Street. Aside from Ho and Fok, Chow King (仇景) and Liang Chi-hao (梁基浩) were listed as subscribers and Chow was the proprietor of Yue Shing Estates (裕成置業, incorporated in 1962) and Tai Yau Ironworks while Liang, who also had business ties with Macau, was the proprietor of King’s Theatre in Central and father of TV executive and politician Selina Chow and Shun Fung Iron Works founder L.Y. Leung (see article on the De La Salas).

The first projects which Lynhall was involved with were not in North Point but across the harbor in Tsim Sha Tsui – the 7 story Hillwood Apartments (山林大廈) at 34-40A Hillwood Road and 11 story Peninsula Apartments (半島大廈) at 16 Mody Road, both of which were built in 1956. The latter was one of the first buildings in HK alongside Man Yee Building in Central and the HK Jockey Club to feature an escalator. (Kung Sheung Evening News, 1956-9-3)

Lynhall spent millions to acquire the site of the former Sky Room Night Club (天宮夜總會, operated by the Gray brothers) in North Point and built the 15 story Empire Apartments (璇宮大廈) at 293-299 King’s Road in 1956. 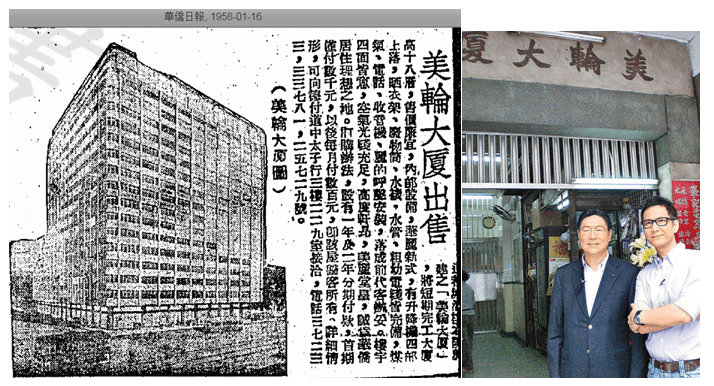 In 1959, Lynhall turned its attention westward to Wanchai where it developed the 12 story Lee Tung Apartments (利東大厦) located at Lee Tung Street in Wanchai across the street from the present-day Hopewell Centre (WKYP, 1959-7-23). Later it built the 20 story Hennessy Apartments (軒尼詩大廈) at 48-52 Percival Street in Causeway Bay with the first three floors occupied by the mainland Chinese department store China Products Co and the 4th floor to Pak Fah Yeow. (WKYP, 1959-5-3) 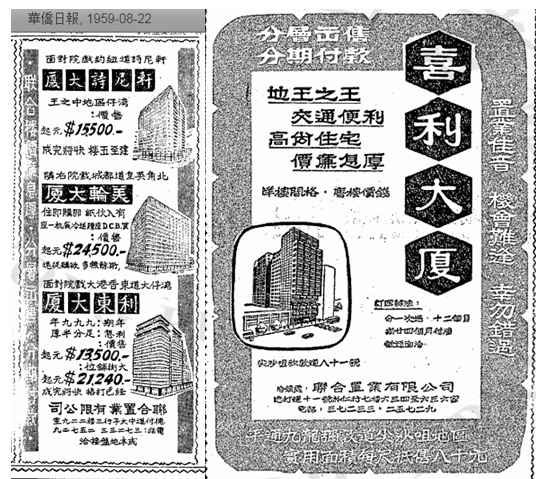 In 1963, Lynhall continued its expansion in Kowloon and filed a lawsuit in the Kowloon District Court requesting court order for them to evict the tenants of 16 storefronts they acquired in Mongkok in the intersection of Shantung Street and Nathan Road for re-development.  The affected merchants include King of Kings restaurant, Golden Gate Bakery, Ying Kee Tea Company, Peiping Shoe Store and others. (WKYP, 1963-5-22). It also built the Harilela Mansion (喜利大廈) at 81 Nathan Road in Tsim Sha Tsui, probably in partnership with the Harilela family. 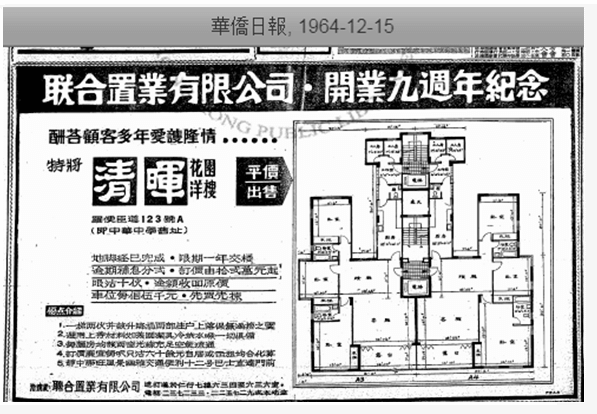 In 1963-64, Lynhall developed two projects in the Mid-Levels – No. 102 Caine Road and Ching Fai Gardens (清暉花園) at 123A Robinson Road which was the former site of the left-wing Chung Wah Middle School (中華中學).In 1965, projects listed in one of its ads included Po Shan Mansion at 10 Po Shan Road, Botanic Terrace (芝蘭台) at 3 Conduit Road (not completed until 1971) and Shui Heung Yuen Apartments (瑞香園大廈) at 41 Jordan Road in Kowloon.

Aside from Lynhall, Li Hong-chit incorporated Luen Shing Estates in 1957 with $1.2 million in capital (dissolved in 1968) and Tai Yau Ironworks with $1 million in capital in 1960 (dissolved in 1973). He was also involved in the restaurant business through his investment in Majestic Restaurant (麗宮酒樓), a Chinese restaurant located at Lynhall’s property Empire Apartments in North Point which was operated by Macanese entertainment tycoon Lau Hang-chung (劉衡仲 d. 1969), who also worked for Ho Yin. 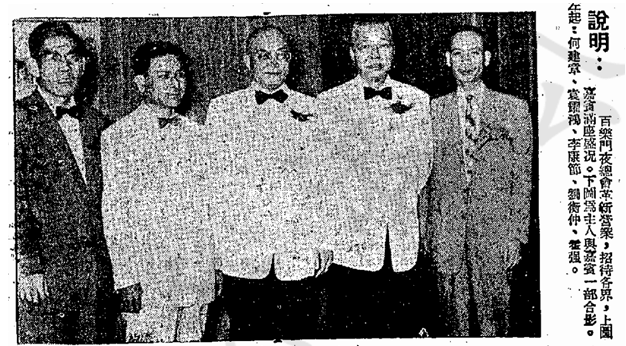 Li Hong-chit was also involved with Lau in the Paramount nightclub and when his son Alan Li (李雅倫), married a Danish woman in 1961, the wedding reception was held at the Paramount (大公報, 1961-09-10).

During the banking crisis and real estate bust in the mid-1960s, the aggressive Lynhall went into financial troubles, a fate shared by many of the developers at the time. Lynhall closed its doors in 1968 when Li and Ho (who allegedly required the Chinese government to bail him out) ended their partnership. Lynhall as a firm however was not formally dissolved until 2001.

In his later years, Li was heavily involved in supporting his hometown of Hetang (荷塘) in Xinhui prefecture. Even in the early years of the People’s Republic, Li had donated industrial supplies such as generators, electric wire, cars and tractors to his hometown. In 1964, he led the fundraising effort to purchase the clubhouse for HK Sun Wui Association (香港新會荷塘同鄉會), contributing $25000 of the $46000 raised. Starting in the early 1970s, he frequently returned to Hetang for visits and provided guarantees to HK compatriots who were doing the same. In 1979, he helped to raise HK$700,000 from fellow HK and Macanese businessmen to rebuild the Hetang Sanatorium (荷塘卫生院). He also organized several businesses in Hetang including a quarry, a garment factory and a cassette tape factory and organized fundraisers for the construction of the Overseas Chinese Building (侨联大厦, $418,000) in 1986 and establishment of the Hetang Vocational Secondary School ($1 mil) in 1987 despite of his ill health at the time.

This article was first posted on 16th November 2018.