Frank Watson has been reading about the Plague outbreak in 1894. There is mention of a “Glass Works Hospital” which had been hastily converted from a glass works factory. He thinks this may have been in Kennedy Town. Can anyone confirm this, provide the exact location and any further information?

“moddsey” through gwulo.com says that the location of the Glassworks was on Victoria Road just up the slope and past the end of Kennedy Town. “moddsey” adds that there is a photo of the Glassworks, circa 1898, on p73 of “City of Victoria” pub Urban Council.

David Bellis through http://gwulo.com/node/15673 has found an 1897 Map (UK National Archive reference MPHH 1-412) which shows a ‘Glass Works’ between Davis Street and Cadogan Street in Kennedy Town. However, moddsey’s location and David’s are different and it is unclear whether there were two ‘glassworks’ in the area or whether the building in moddsey’s photograph was used for a different purpose.

Can anyone clarify this and/or supple information about the glassworks (or two) itself. Did it ever actually produce glass and what happened to the building(s) after the plague ended? 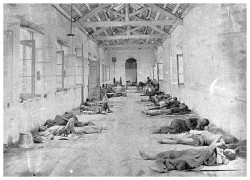