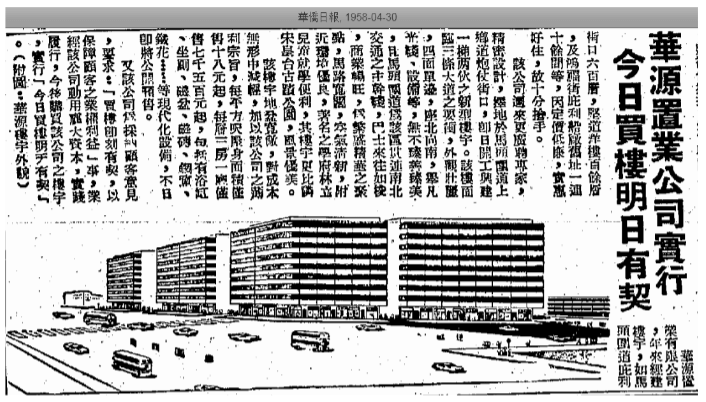 Earlier on the website, we covered the careers of the Chung brothers, whose “E.Wah Aik Sang” (怡華益新) earned them the title of “king of industrial buildings”. Before founding E.Wah and Aik Sang, the two brothers launched Hongkong Wah Yuen Investment, a leading property development firm active in the 1950s and 1960s which had developed a number of residential and industrial buildings, most of which are still standing today. Incorporated in 1955 with HK$10 million in capital, Wah Yuen was one of the top 14 property developers by capital at the time alongside Henry Fok’s National Investment, K.C. Wong’s Dah Yuan Real Estate, Lee Hysan Estate and Tai Cheung (see articles). 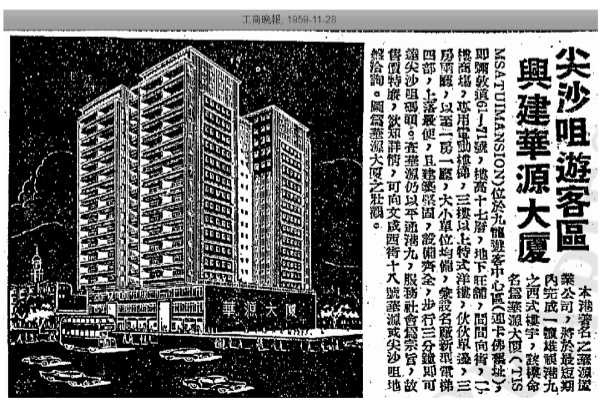 Wah Yuen initially operated out of the office of its affiliate Yat Yuen Hong (鎰源行), the trading firm established by the two oldest Chung brothers – Cheung Kung-hai and Chung Ming-fai at 18 Bonham Strand West. Some of the earliest projects developed by Wah Yuen as advertised in 1958 include 100 residential flats at 38,40,42, 48 Caine Road in the Mid-Levels (since been re-developed) and two residential projects on the former site of the Bailey Shipyard (庇利船廠) in To Kwa Wan (The site was over 300,000 sq ft and Wah Yuen was only one of ten developers which developed properties on the site). It also acquired the original site of Lane Crawford’s Kowloon branch at 61-71 Nathan Road and built the 17-story Tsim Sha Tsui Mansion (華源大廋) in 1959 which include shops on the first two floors. 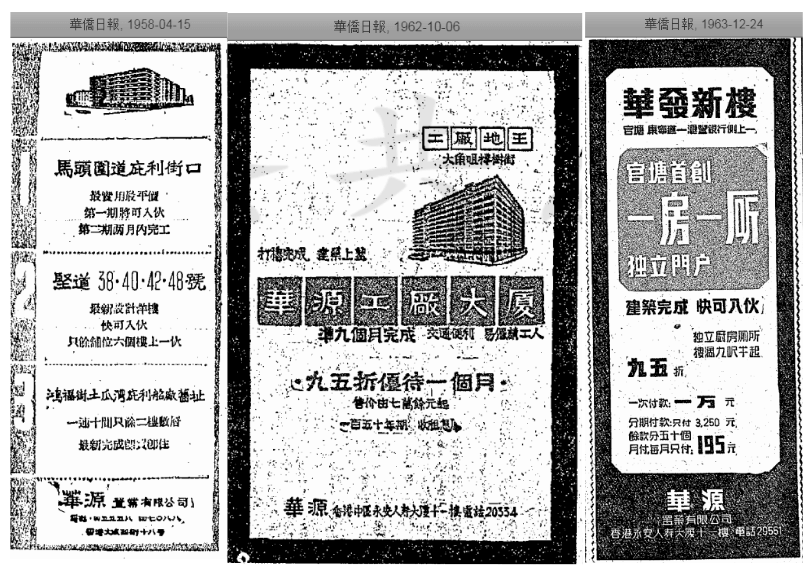 By the early 1960s, Wah Yuen had moved out of its Sheung Wan location into the 11th floor of the Wing On Life Building at 22 Des Voeux Road Central.

In 1962, Wah Yuen developed Wah Yuen Factory Building (華源工廠大廈) at 15-21 Beech Street in Tai Kok Tsui, with individual units starting at HK$70000 each. In 1963, Wah Yuen built Wah Fat Buiding (華發大樓) at 91-103 Hong Ning Road in Kwun Tong, which was allegedly the first apartment building with separate living room and bedroom in Kwun Tong – it was sold for HK$10000 per unit for one lumpsum or $3250 upfront and 50 monthly payments of $195. The same year, it also developed the residential building Boundary Court (瑞華樓) at 165 Boundary Street and Long Wah Building (龍華大廈) at 17-19 Lock Road in Tsim Sha Tsui, which is across the street from the President Hotel that was being built by the family around the same time. 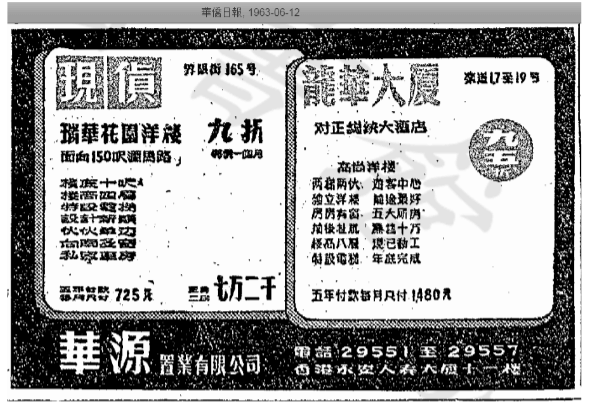 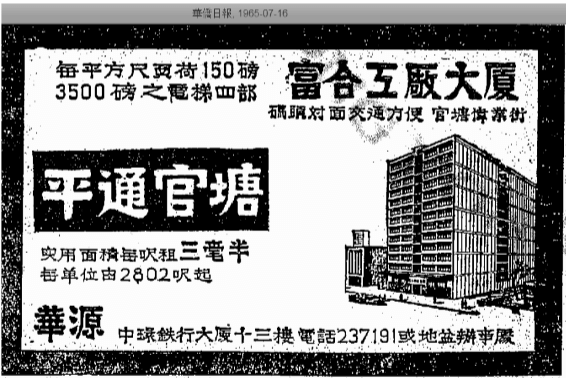 In 1965, Wah Yuen developed Fu Hop Factory Building (富合工廠大廈) at 209-211 Wai Yip Street in Kwun Tong – unit size was starting at 2802 square feet and the ad above emphasized that the building include four elevators which could carry up to 3500 pounds.

Aside from Wah Yuen, the Chung brothers also established Ming Man Land Investment Co Ltd (明文置業有限公司, incorporated in 1957 and dissolved in 1974, probably derived its name from two of the Chung brothers – second son Chung Ming-fai of Melbourne Enterprise and third son Chung Ching-man of Eda Group), Wah Yuen and Ming Man were the founding shareholders of President Hotel Ltd in 1961 which developed the hotel of the same name on Nathan Road in 1964 (renamed the Hongkong Hyatt Hotel in 1969 and became iSquare in 2006). Wah Yuen and Man Ming also developed the Silver Theatre (銀都戲院) in Kwun Tong in 1963, the first movie theatre in the new industrial district. The theatre, which include a bank and a restaurant and 4 floors of office space was designed by prominent Shanghainese architect Robert Fan (see article) and operated until 2009 when it was demolished as part of the urban re-development of the  Kwun Tong area. In 1964, Wah Yuen teamed up with Cheong K. (see article) to develop Parker Estate in North Point. From the 1960s onwards, the Chung brothers still collaborated closely but increasingly developed properties under their individual firms as their children (third generation of the Chung family) entered the picture so the activities of Wah Yuen decreased. 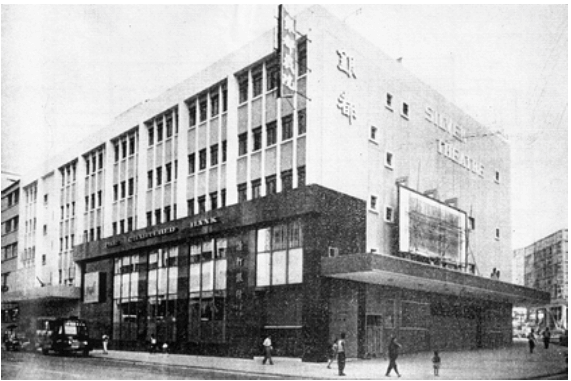 Silver Theatre when it opened in 1963 (Far East & HK Builders)