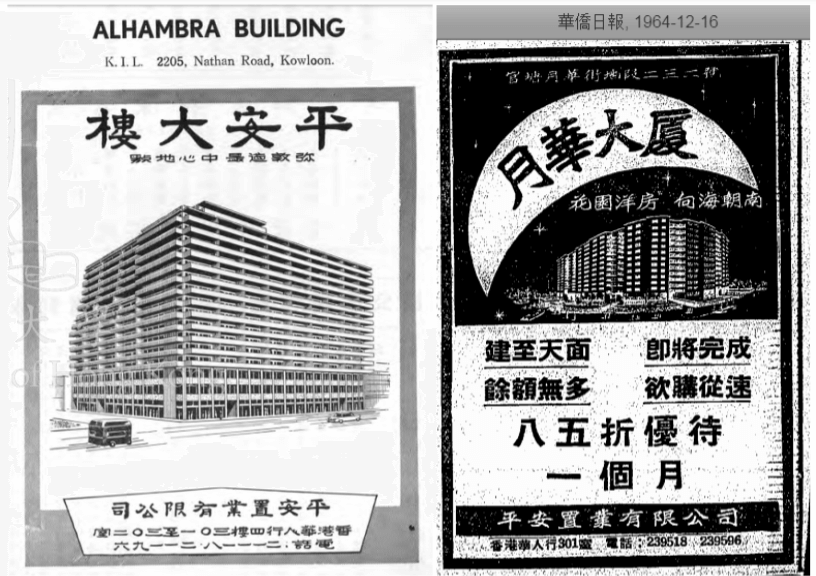 In the late 1950s and early 1960s, one of most active property developers in Hong Kong was Cheng Keng-chuan, whose property companies were involved in landmark projects such as Alhambra Building on Nathan Road and Evergreen Villa on Stubbs Road in partnership with other developers such Kwan Kai-ming, Tseng Cheng and Chui Yu-chuen covered earlier in the article about Kiu Fung Investment.

Born in 1911, Cheng was a native of Weiyang in Guangdong province. Little information is available about the early years of Cheng Keng-chuen – an individual of the same name is listed as producer of three films – Wife in the Morning, Sister in law at Night (1947, starring Pak Suet-sin), Prostituting to Raise an Orphan (1947, starring Cheung Yuet-yee and Sun Ma Sze-tsang) and Poor Daddy (1952, starring Pak Yin and Cheung Wood-yau). The first two movies were directed by Hung Chung-ho (1902-1963), famous director and grandfather of famous action star Sammo Hung and both were produced by Universe Films and distributed by Lifu Films (利孚影業). After he made his fortune in the real estate business, Cheng also served as director of several leading charitable organizations such as Lok Sin Tong and Tung Wah Group of Hospitals (1960-61).

Cheng Keng-chuen (likely the man in the black suit with white pocket square in the centre) being sent off at Kai Tak before his trip to Europe and the US to study property development and attend the New York World Expo by his friends Tung Wah chairman Cheung Yuk-lun and Po Leung Kuk chairman Cham Siu-leun (WKYP, 1964-7-6)

The first real estate company Cheng was associated with was Kwan Hing Investment (群興置業), which he incorporated in June 1957 with $1 million in capital in partnership with Mak Lun of 61 Hau Wong Road in Kowloon City. In 1958, Kwan Hing built the Comfort Building (安樂大厦) at 86-88 Nathan Road and the firm is still a live company today. In December 1957, Cheng incorporated Alhambra Investment Co Ltd (平安置業) with $1.2 million in capital in partnership with the trios behind Kiu Fung Investment – Kwan Kai-ming, Chui Yue-chuen and Tseng Cheng and acquired the landmark Alhambra Theatre (平安戲院) at 383-389 Nathan Road, the first luxurious theater in Kowloon which was originally opened in 1934 by HK Amusements controlled by Lo Kan, the cinema king of southern China.

Left: Ad for Kwan Hing’s Comfort Building in Tsim Sha Tsui in 1958 (KSEN, 1958-10-2); Right: picture of the collapsed Alhambra Theatre during its fatal demolition in 1958

Shortly after acquiring the Alhambra Theatre, Cheng and partners began plans to re-develop the property and hired Sung Kee Zee & Sons (see Shanghainese Builders Part I) as contractor and the Penn-educated Edward Lee Wei-kwong (李為光) as structural engineer and architect to handle the demolition and construction. Knowing that the demolition might be tricky because of the unique Moorish designs of the structure, Cheng went through the trouble of acquiring the original blueprint from the wife of the theater’s architect Wong Tai-cho (黃泰初, one of the first engineering graduates of HKU, his wife was the sister of Lai Man-wai, the father of HK cinema) but unfortunately that was insufficient and on May 17th 1958, part of the structure collapsed during demolition, killing 6 workers and injuring 11 others, making it one of the most devastating construction accidents in HK history. 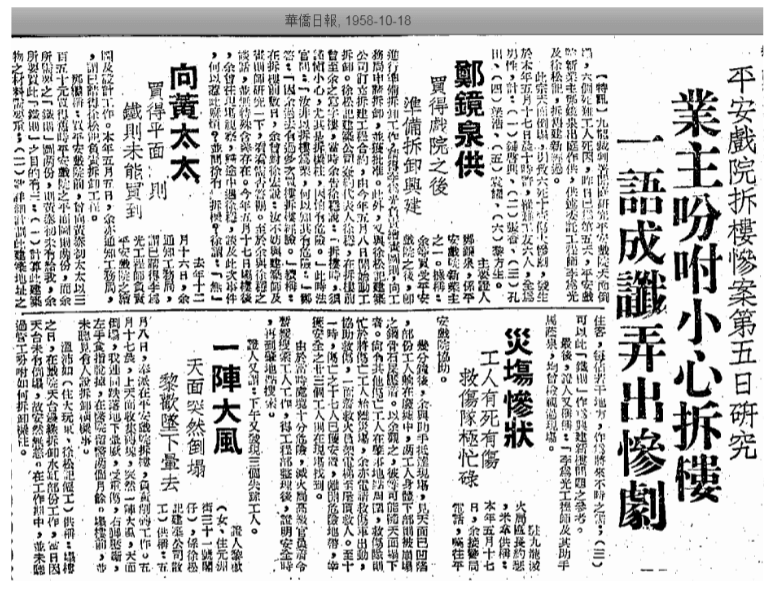 Article about the court hearing on the Alhambra accident including testimony by Cheng Keng-chuen in October 1958 (WKYP, 1958-10-18)

Despite the accident, construction pressed ahead at the Alhambra site and in fact Cheng and Lee even invited students from the architectural department at HKU to visit the 3/4 completed site in June 1959. When the 17-story Alhambra Building was completed in 1960, it was one of the biggest building complex in Kowloon with shops on the first two floors, restaurant on the third floor and residential/commercial units on fourth floor and above with flats starting at HK$9000 each and shops starting at HK$11000 each. (WKYP, 1958-9-20; 1959-6-27). In September 1960, Kwan Kai-ming and Law Chi-sang opened the 100 tables Alhambra Restaurant (平安大酒樓) and Alhambra Ballroom in the new building featuring entertainment by Cantonese opera star Wan Chi-chung, famous host Wu Cheung-chiu and top singers from the Philippines. (As a company, Alhambra Restaurant was dissolved in 1978) 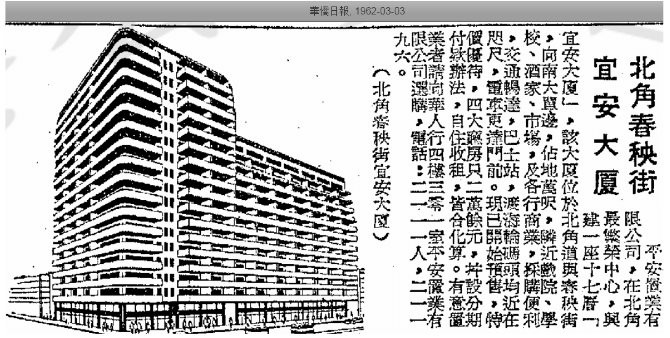 In May 1962, Cheng Keng-chuen incorporated Wah Tak Investment Co (華德置業) in partnership with Tseng Cheng and others and won the bid for the 183,400 sq ft site (Inland Lot 7491) on Stubbs Road at a government auction without any competing bidders at the asking price of $8 million in July of the same year. The bid required Wah Tak to build $5 million worth of properties on top of the site and permitted the building to be over 13 stories high. (香港工商日報, 1962-07-24). Ultimately, Wah Tak developed six blocks of 16 to 21-story high end residential buildings with 2 spacious flats per floor known as Evergreen Villa which occupied only 15% of the 183,400 sq ft site with the remainder as parks and recreational areas. As a firm Wah Tak Investment was dissolved in 1975 although Evergreen Villa remained one of top luxury apartment buildings after almost half a century.

Not much info is available about Cheng Keng-chuen after the 1960s. His eldest daughter Simmy Edith Cheng (鄭倩薇) is one of the early female architects in HK and the wife of prominent golfer and insurance executive Willie Woo (吳肇基).

This article was first posted on 3rd June 2019.