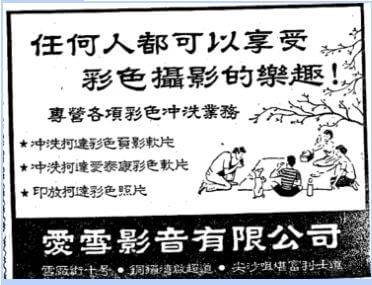 Aside from Stereo Ltd., Asia Photo Supply was another pioneer and leader in the photo-finishing business in HK and a leading dealer of photographic equipment from the 1940s to the 1970s.

The firm was founded during the Japanese occupation in 1943 and its original store was located at the ground floor of 10 Ice House Street in Central. In 1949, the firm began color photofinishing service, making them a pioneer in Hong Kong. The firm’s chairman was John Liao (廖長泰) while the day to day operations was oversaw by its general manager S.P. Ko (高培). Other directors in the 1950s included Daniel Wang and Ong Kim-yam. (Business Directory of HK & Macao)

By 1960, Asia Photo Supply had three outlets – 10 Ice House Street in Central, Kai Chiu Road in Causeway Bay and 2A Humphreys Avenue in Tsim Sha Tsui as shown by the ad above. In June of that year, a show of Agfa cameras was organized by its distributor Jebsen & Co at the Causeway Bay outlet of APS. (Chinese Students Weekly, 1960-6-3)

In 1964, APS became the first firm in HK to invest HK$180,000 in equipment to provide color projection printing service. (Far Eastern Economic Review). As the store’s original site in Central was being re-developed into the New Henry House, APS relocated to Hang Chong Building at 5 Queen’s Road Central.

According to the Fodor’s Guide to Japan and East Asia in 1965, Asia Photo Supply carried “over 100 makes of cameras, ranging in price from a few dollars to thousands”.

In March 1967, APS opened its Causeway Bay branch at the Capitor Theater – the display according to an article was organized by specific types of camera equipment which was different from other camera shops at the time. (WKYP, 1967-3-9) In November of the same year, the firm did a special exhibition of pictures taken from space. (WKYP 1967-11-16) 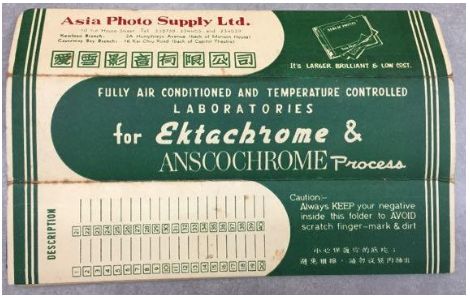 An Asia Photo Supply envelope, likely from the early 1960s based on the Ice House Street address

In March 1970, Asia Photo Supply did a photo exhibition about the Osaka World Expo (1970-3-16). The next month, its managing director S.P. Ko and his colleagues visited Japan to learn about the latest camera and photo technology and visited the World Expo. (KSDN, 1970-4-27). In October of the same year, APS and its competitor Stereo Ltd sponsored the photography competition at the Lai Chi Kok Amusement Park by donating cameras as prizes (WKYP, 1970-10-22)

In 1972, the firm was also listed as the exclusive agent in HK for Bronica cameras, a Japanese brand founded in 1956 that had since faded into history. (Fodors Guide, 1972)

In March 1975, burglars broke the window display of Asia Photo Supply’s main store in Central and took $4000 worth of camera equipment from the store in broad daylight. (KSDN, 1975-3-6) In December of the same year, the firm purchased the new Kodak 2620 color printer which as capable of printing 3000 pictures per hour, enabling the Causeway Bay and North Point branches to receive order by noon and deliver the prints by 7pm. (WKYP, 1975-12-16)

In 1980, S.P. Ko and John Liao were still listed as directors of the firm while other directors included Chua Suey-kim, Lam Chiu-ting and Ms. Ho Wai-ling. (HK $ Directory)

By 1989, APS’ Central store was located at 5 Queen Victoria Street.

As a firm, Asia Photo Supply Ltd was incorporated in 1951 and dissolved in 2014.

This article was first posted on 2nd March 2020.